I took my first pottery class. It was a humbling experience at best.
When I arrived, I was assigned my wheel and was given my tools: 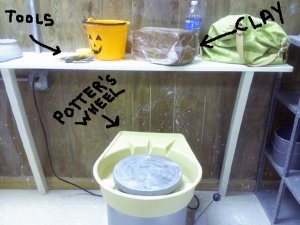 You use your garroting tool (really, it is a wire with two wooden handles, just like in The Sopranos) to cut a chunk of clay.
You wedge (knead) the clay to “awaken” it and to remove air bubbles. “Make a ram’s head” Kaye told me, as she expertly produced something very much resembling the head of such an animal. As she wedged the lump of clay, the ram’s head appeared and disappeared under her experienced hands.
When I tried it, well, let’s just say that the animal whose head I made has not yet been seen in nature.
Next, Kaye showed me how to center the clay. You put the lump of clay in the middle of a tray called a bat and then you affix the bat to the potter’s wheel. Then you turn the wheel on and using both your hands you center the clay. I was to practice this for an hour. An hour?! Come on!
A child could center clay

An hour later, I still could not do it properly.

Sweat pouring down my red clay-smudged face, feelings of shame and insecurity running rampart in my heart, I continued until I got the clay to stop wobbling so much.
“Keep your elbows tucked in and point your left hand toward 1 o’clock” Kaye reminded me.
My more experienced classmates kindly encouraged me:
“It takes a while” someone said.
“Once you get this, the rest is easy” Dave said. Dave has been doing this a long time; ever since returning from Vietnam. I stopped for a second to watch Dave put some finishing touches on a beautiful flower vase.
While I was struggling with this very first step, Kaye built a huge, perfectly even urn. As it turned flawlessly on the wheel, Kaye exclaimed “it’s a little wobbly”.
I felt small.

I moved on to the next step, which was to make a cylinder out of my lump of clay. Kaye had already shown me how to do this. She made a whole in the middle using her thumbs while the wheel spun.
“Only touch the clay when it is moving” she said.
Then, she touched the clay and it magically rose smoothly and evenly into a perfect tube.
I practiced this for the next hour.
These are the results: 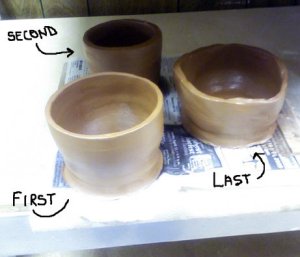 If you look really carefully, you can see that by the end of the class, I was tired and disillusioned.

So it will be a while before I produce my first Olla it seems. Let’s just hope that pottery does not totally destroy my self-esteem and I end up on the street muttering to myself “I did tuck my elbows in! I did push toward 1 O’clock!”